Missing from Foresight’s report on the future of food: some good old-fashioned political economy.

the first of these two posts, I reviewed the Foresight report on the future of food, and noted that it seemed to be blind to potentially disruptive change. It also seems to be blind to the political economy of global food. In this post, I’m going to look at this second issue in more detail.

The Foresight report mentions markets, and generally likes them, but seems not to address anywhere the issues of acute market concentration in the global food processing sector (I couldn’t see anywhere the ‘hour glass’ model (opens pdf) which has been popularised by Tim Lang), or in many national food retail markets. It makes the right noises about food producers not gaining advantage by externalising their environmental costs (as American corn producers seem to have done post-NAFTA to their Mexican counterparts) but almost immediately appears to “balance” this by saying that countries shouldn’t use sustainability as a disguised form of protectionism, as if these are issues of comparable scale.

And it’s horrified by the prospect of protectionism in response to food shortage, and with good reason, since we’ve seen several times in the past few years protectionist measures in one country turn a set of food problems into a full-blown regional crisis. But again, such measures are rational short-term responses by the actors involved, as a moment’s game theory assessment tells you. But because there’s no analysis of the way in which political systems interplay with food markets and consumption, we are stuck at the bland level of the policy recommendation, rather than a richer understanding of the local or national dynamics of a food crisis.

Foresight has a single scenario – of ‘sustainable intensification’

Scenarios can be over-rated as a futures tool, but if ever there was a need for a set of scenarios – and not the ‘up a bit/down a bit’ modelling scenarios which are here – to give people a safe space to test assumptions, look for blindspots, and think about future alternatives, this was it. The report even says (p61) “a major challenge for policy makers will be to cope with the unexpected”, at the head of quite an interesting list of “drivers of change that are difficult to imagine”, but this thinking isn’t developed anywhere.

But it seems there’s a reason for this. The Foresight report does have a single scenario, of ‘sustainable intensification’. The Royal Society defined this in a recent report as a system “in which yields are increased without adverse environmental impact and without the cultivation of more land”, and is defined by Foresight as “simultaneously raising yields, increasing the efficiency with which inputs are used and reducing the negative environmental effects of food production”. But frankly, this covers a multitude, depending on your perspective, anything from GM foods to super-dairies to crop improvement, soil conservation, and forms of aquaculture. (Actually, on the super-dairies, maybe not, it turns out).

In the main, the report seems to have two big blindspots. The first is that it describes demand for energy and water, even looking out only to 2030, increasing by 45% and 30% respectively, along with limited scope to increase the quality of agricultural land (I assume this is supposed to mean “unconstrained’ demand).  What this leads to is a sense that all of these changes are not urgent. That’s not the message you take away from some of the charts Lester Brown has recently published in World On The Edge, showing some of the long-term changes in food markets. 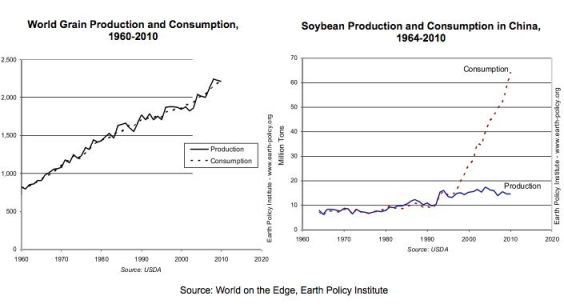 The stories it tells about water are just as depressing, by the way. And on top of that, of course, reclaiming degraded soil is a tough long-term issue, which has led some people to argue that ‘soil is not a renewable resource’.

The second big blind spot is about volatility. The report says it’s a bad thing, which it is, but the lack of systems thinking means – again – it doesn’t think through how this plays out politically. And it’s worth, for a moment, comparing and contrasting the work done in 2007-08 by Chatham House on the same subject (opens pdf). Although the scenarios look, from the way they’re presented in the report, as if they’re produced through a 2×2 ‘double uncertainty’ matrix, they actually sit on top of a systems analysis.

(Click on the thumbnail for more detail). These are shorter term than the Foresight project – they range from 5 years to 10+years – and include a reasonably sophisticated view of how politics, markets, economics, and food production play out together. Disconcertingly, we seem to have arrived at their ‘Food inflation’ scenario about six years early. But they also manage, in their ‘New Era’ scenario, to tell a story of how a food transition could occur.

There’s some complexity here, but recent research reported on Global Dashboard suggests that while the rural poor have some resilience to food price spikes because they can partly disconnect from global markets, this is not so true of less poor and more urban consumers. And this is interesting, since the inexorable trend towards urbanisation is in other respects mostly a good thing, because it increases education and economic participation and reduces birthrates.

But the combination of high food prices, open markets and young populations is explosive, and has certainly been a large factor in the uprisings in both Tunisia and Egypt. The Arab countries import more than half their food. And it may be that this urban effect may be one of the reasons why food price volatility is no greater than in the ’70s and ’80s, but the impact seems much larger.

Is it too speculative to see the 25 January revolt as the first food revolution fuelled by peak oil? Oil prices affect food prices when you have a petro-chemical food economy.

The Foresight report creates a strawman distinction between food self-sufficiency and well-governed (“fair and fully functioning”) markets, and – no surprise – prefers the latter. But as Mike Small observes, food sovereignty – which isn’t the same thing as self-sufficiency – is about dignity and freedom as well. Bread has been linked with roses for exactly a hundred years.