The Limits to Growth tells a credible, and alarming, story about likely outcomes for the planet over the next two decades. But these are still scenarios, not predictions.

I was prompted by a post on the Smithsonian blog a few months ago to go back to read The Limits to Growth: The 30-Year Update. The Smithsonian post had evaluated the Limits’ 1972 main case projections against actual consumption to 2000, and found them impressively close. Since the most common outcome of the model is “overshoot and collapse”, in a bit more than a decade’s time, it seemed a good idea to understand it a bit better. Quotes and page numbers are from the 30-Year Update edition, published by Earthscan in London in 2005.

The argument of Limits to Growth is built on a model, World3, which has evolved over time, and all models are simplifications. Specifically, it is a systems dynamics model, built around notions of stocks, flows and sinks. Systems models also include delays, which are sometimes poorly understood by economists and technologists – who were among the noisiest critics of the original Limits to Growth book – because their mental and theoretical models assume rapid corrections to systems shortfalls.

To write this post, I’ve been back through Limits to Growth, pulling out important parts of the argument. So first, the components of the model. World3 simplifies the world into these main components: population, industrial capital, non-renewable resources, industrial output, pollution, and agricultural production. Because it is a systems dynamics model, there is feedback between different elements, which, when combined with delays, create complexity and non-linear behaviour.

This is my large simplification of the model that sits behind World3 (to be clear, this does not come from Limits to Growth). 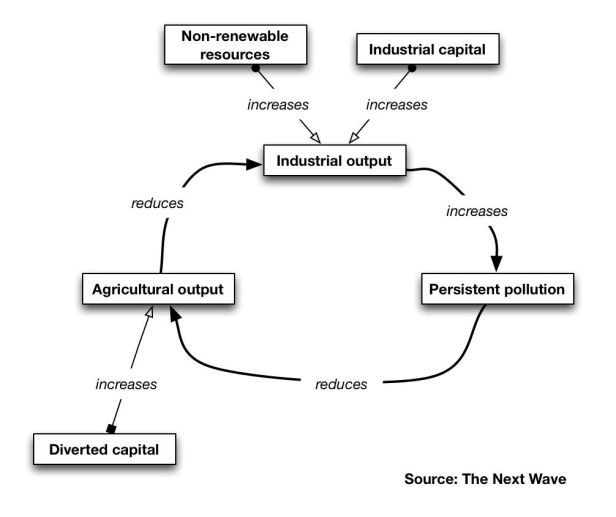 From this, the Limits to Growth team developed 10 scenarios, representing different paths and making different assumptions about rates of population growth and industrial output. The most common outcome, after thousands of runs of the model, is “overshoot and collapse”, with industrial output declining in the 2020s and population declining in the 2030s. As they say, you don’t necessarily need a model to understand this, but a model enables you to be clear about your assumptions about the world.

Collapse is not inevitable

But (and these are important buts) collapse is not inevitable, even though we have now overshot, with the human footprint exceeding the resources of the planet. Growth does not, inevitably, lead to collapse; it depends on how you organise the growth. It is possible, even now, to get to “overshoot and oscillation” at which production and consumption are re-stabilised at a level within the carrying capacity of the planet. But to achieve this, the system needs to retain enough capacity to repair itself.

The model has some assumptions in it which have been borne out by events since, both of which lead to non-linear outcomes – in the model and, it seems, in the actual world [pp 145,147]:

Now, as mentioned above, The Limits to Growth is famous for the sceptical response it generated. Broadly, the argument was criticised by people who thought it underplayed the impact of technological innovation, and underestimated the response of markets to price signals generated by shortages. They take this on directly.

“For many economists technology is a single exponent in some variant of the Cobb-Douglas production function – it works automatically, without delay, at no cost, free of limits, and produces only desirable outcomes. … In the “real world,” however, we cannot find technology with those wonderful properties. The technologies we see are highly specific to particular problems; they cost money and take a long time to develop” [p210].

In other words, adjustment mechanisms are not free: they have costs, and these costs tend to increase in a non-linear fashion as limits are approached. Second,  both markets and innovation tend to serve the goals and aims of their societies (so if society is still geared to unsustainable growth, then so will markets and innovation). Third, the signals to which markets and technologists respond are not clear: they are riddled with feedback, ‘noise’, and delays. And finally, as they observe, “Time is in fact the ultimate limit in the World3 – and, we believe, in the ‘real world.'” The more successfully a society postpones problems, the more likely it is to run into multiple simultaneous problems. Postponing the crisis, in other words, makes it bigger: “the world system … runs out of the ability to cope” [p223, italics in original]. Equally, as we postpone the crisis, the number of viable pathways to the future diminishes as options are closed off by the increasing level of overshoot.

Systems pursue their own goals

After four years of financial crisis, not to say four years of watching bankers at play with our money, perhaps it is no longer controversial to suggest that systems tend to pursue goals which are not necessarily good for the common wealth. (Although even now people seem to overlook the point that Upton Sinclair made during the last great recession). There is a striking passage from the book that underlines this point – a quote from a Japanese journalist –  that underlines the point:

“You are thinking of the whaling industry as an organization that is interested in maintaining whales; actually it is better viewed as a huge quantity of [money] capital attempting to earn the highest possible return” [p233].

Although the Limits to Growth team were attacked for being pessimistic, their own view is that there are many features of the model which make it too optimistic [p150]. It lacks many social limits, such as corruption, crime, and protest. It also treats the world as a single entity, whereas in practice uneven distribution of impacts of change across different countries with different levels of income mean there will be even longer delays between changes in the environment and response [p221].

“World3 … does not distinguish the rich parts of the world from the poor. All signals of hunger, resource scarcity and pollution are assumed to come to the world as a whole and to elicit responses that draw on the coping capabilities of the world as a whole. That simplification makes the model very optimistic. … So is the assumption that political decisions are made without cost and without delay. We have to remember, too, that the World3 model has no military sector to drain capital and resources from the productive economy. … The model represents the uppermost possibilities for the “real world”.

A clash of worldviews

Looking back at the storm which followed the publication of The Limits to Growth with the benefits of 40 years of hindsight, it’s clear now that it was about a clash of worldviews. The project took the preferred tools of mainstream strategy and analysis (data and modelling) and used them to produce a set of outputs that were profoundly challenging to the mainstream. We were, in 1972, just ahead of the oil price shock that dominated the rest of the ’70s, still in a world that believed in metaphors of abundance and plenty. At the time we were still living comfortably within the planet’s environmental limits.

No more. But the political problems that come with talk of overshoot and limits have not gone away: if anything they have become more acute. “Any talk of reducing growth feeds into a bitter argument about distribution”, they write [p124]. Yet although our choices have narrowed, we do still have choices. As the Rocky Mountain Institute argues, even within the current system there is considerable scope to reduce the impacts of affluence and the throughout of materials in production processes. But although this is valuable, it seems to me unlikely to be enough without a change in goals, and by extension, in worldviews. In The Limits to Growth, the authors set some store by changes in information, including changes in rules and goals – which are themselves a form of information: “When its information flows are changed, any system will behave differently” [p270]. But systems always resist such changes, strongly, as we have seen repeatedly in the last five years. In the end, the difference between overshoot and collapse, and overshoot and oscillation, comes down to politics.

My earlier post, ‘Eco-pragmatism and resilience’, may also be of interest. The diagram above, by Andrew Curry, is published here under a Creative Commons licence: some rights reserved.

8 thoughts on “Re-reading The Limits to Growth”