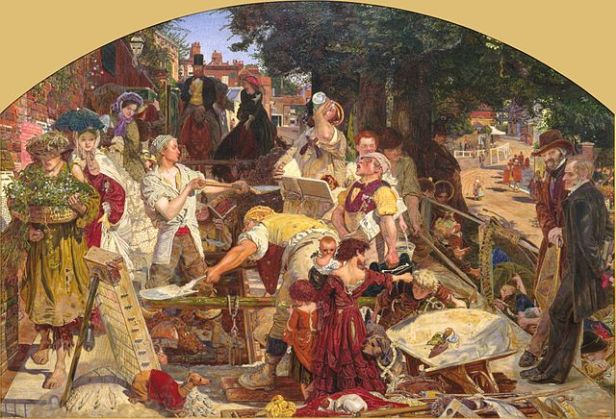 This post is a long extract from my essay on The Future of Work written for Future Agenda. The full piece is on Medium.

The current discussion about the future of work seems to be monopolised by the version of the future in which technology destroys jobs. It has gained an air of inevitability, as if it is the only possible future. NESTA’s open minded report suggested that the “robots hypothesis” resonated because it connected “two powerful themes in popular culture: the rapid advance of IT, and the startling growth in inequality.” But there is a problem: it hasn’t happened before.

So it is worth considering reasons why it might just be a phase. The economic historian Carlota Perez has a model of technological development that describes five long waves, or surges, since the Industrial Revolution. Each is around 50–60 years and follows an S-curve pattern; the last quarter of each is marked by saturated markets, diminishing investment opportunities and declining returns. The first part of the 20th century was dominated by the oil and auto surge; the latter part by ICT. The ICT wave is now reaching the turning point at which returns start to fall.

On this model, finance is looking for new opportunities, and although it is too early to say what the next platform will be, and we’re still 10–15 years away from it, it is possible to imagine that the next technological surge might be built around, say, a material such as graphene.

David Autor concludes that much of “the labor market woes” of the past decade are not down to computerisation, but to the financial crisis and reduced investment (starting with the dot.com collapse) and the impact of globalisation on labour markets. He suggests that many middle-skill jobs will prove more resistant to unbundling than advertised; while computers can do specific tasks, turning collections of tasks into self-contained jobs, and then automating them, requires substantial investment. In the long run, people are both more flexible and cheaper.

One implication is that the question of the future of work may actually be about power in the labour market. This leads to broadly political interpretations of the future of working conditions, ranging from Guy Standing’s formulation of the fragile “precariat”, facing intermittent, insecure work, David Weil’s description of the “fissured workplace”, in which many functions are sub-contracted, and the rise of campaigns for the Living Wage.

The way ahead depends on how you read this bifurcation between the technologists and the sceptics. We don’t know who is right: there are no future facts. But there are some observations that can help shape our perspectives on this.

The first is that these widely divergent views are a feature of this point in the technology cycle. The most excitable projections of the future of the car were seen at just this point on the oil and auto curve in the 1950s.

The technology S-curve in Figure 1, based on the work of Carlota Perez, helps us to understand why. At this point, when the S-curve is at or approaching its second inflection point, people have been experiencing rapid technological change for the best part of two generations. The notion that “the only constant is change” has become a breathless platitude. The technologists’ perspective (point ’t’ in Figure 1) is a projection of this steep ramp. The sceptics note instead sign of falling returns and declining customer utility — and see a flattening of the line (point ’s). The gap is large, and one’s perspective on it is a matter of worldview, not evidence.

Figure 1: the technology S-curve and the future expectations gap Second, almost all business innovation and new business value is driven by the application of knowledge, and the way it is embedded in individuals, teams, and systems. The Futures Company has explored this in recent research with the Association of Finnish Work on the idea of ‘high value work.’ This is true of a whole range of knowledge, including knowledge of service and customers, and knowledge of culture and place, as well as technological knowledge. You don’t have to be Google to make this work for you. The most successful businesses use technology to complement and enhance this knowledge, not to replace it.

Third, the trend towards values and purpose in work is a deep and powerful one. If Millennials express a desire for meaningful work, this is also true more broadly. We are on the cusp of a transition to a world where, as Hardin Tibbs (2011) has argued, half of the populations of Europe and the United States subscribe to post-modern values (drawing on Inglehart) of autonomy and diversity. The workplace will not escape this trend.

Fourth, the bargain that businesses struck in the 1980s and 1990s, as they enforced flexibility and “downsized” headcount, may turn out to be a Faustian pact. Shedding jobs and exerting tight control of labour markets increased short-run profits. But at the same time that same control squeezed out their sources of growth. As both the OECD (Cingano, 2014) and the IMF (Ostry et al, 2014) have noted recently, wage inequality has been a further drag on economic growth. To regain growth, they are likely to have to increase wages and give back some control and power to their workforces.

My own best guess is that we are not headed for long-run technological unemployment. I have changed my mind about this over the past year as I have spent more time with the evidence.

The explanation that seems best to fit present state of work and labour markets is that it has been through a “perfect storm” of a globalised workforce, the deskilling of routine work (which was highly vulnerable to automation) and the shift of these workers into manual or service work, and aggressive deregulation of labour markets driven by a neoliberal political agenda.

But, and it is a big but, we’re only part of the way through the dislocation to work and to labour markets caused by this perfect storm. Things will not get better quickly.

Looking at the shorter-term impacts, then, it’s possible to see a range of approaches to this turbulence in the world of work. Governments have options, largely about whether to intervene in labour markets to influence work outcomes, or not. But employers are also moving to new strategies, not out of goodwill but through self-interest.

These options, highly simplified, are shown in the matrix (Figure 2), which contrasts laisser-faire approaches with interventionist approaches.

Figure 2: Indicative scenarios for the future of work

The race to the bottom: This laisser-faire option operates on the principle that labour market flexibility is the secret to increased employment in a globalised labour market. In practice, nearly all countries have increased flexibility and permitted more casualised work over the past decade. The evidence increasingly suggests, however, that the pursuit of low value jobs leads to a vicious cycle of low productivity, low investment, low growth, and low tax and social contribution from business.

This policy approach also involves government subsidy to employers, as low-paid workers are supported by state payments. Increasingly this looks like a political choice that is no longer supported by economic evidence.

Enlightened self interest: It appears that employers who pay better and create better working environments do better financially. Walmart is a relevant case. Over the last decade, its share price has been broadly stagnant, while Costco has outperformed it “by a considerable margin”, in terms of sales, earnings or stock market returns. One reason: according to HBR, far lower staff turnover means knowledge is kept in the company — and drives customer engagement. The Spanish retailer Mercadona similarly invests heavily both in training and stock management systems.

Wages and labour performance are also becoming part of businesses’ reputational capital. See, for example, the increasing success of the UK Living Wage campaign in signing up large companies as “living wage employers”. The public sector can encourage this, for example by giving tax breaks or other forms of support to companies who deliver such commitments.

Keeping the market honest: Turning to more interventionist approaches, the state can take the view that it wants to drive unscrupulous low-wage employers out of the market as a way of driving up standards and investment (low-wage employers spend less on training, and under-invest in capital equipment, which reduces productivity.) They would enforce (and increase) minimum wages, through regulation, law and procurement.

This removes free-riders from the market. Although conventional wisdom has argued in the past that minimum wage legislation costs jobs, this seems to be a weaker effect than claimed.

Re-imagining work: Much of our intervention in the labour market is driven by a view that it creates social goods, from an economic and  But it is possible that such findings are linked to a set of “modernist” social values that are rapidly giving way to “post-materialist” values. People with some income and a degree of social capital who do not have to work already worthwhile things to do, including volunteering. This is part of the argument for the Basic Income: that as we move to the “post-industrial” world envisioned by Daniel Bell, in which skills are more embodied in personal knowledge, that encouraging traditional work is no longer the only, or the best, way to get the social benefits from productive engagement.

The rise of the basic income

Until very recently, the idea of a basic income, a minimum sum paid to all people regardless of their work status, was right of the fringe of political discourse. But it has been moving rapidly towards the mainstream. The idea has deep roots: it goes back to H.G Wells, George Bernard Shaw, even Tom Paine. Betrand Russell promoted it as “a vagabond’s wage.”

The analysis in this provocation helps to explain why. It is a policy idea that helps to improve outcomes whether the technologists or the sceptics turn out to be right. And in the meantime it helps to shore up economies, and individuals, that are struggling in the slow readjustment of labour markets.

If the “robots” hypothesis is right, we’ll need a basic income to make the economy work (markets need people who can afford to buy products). If the market power argument is right, then basic income keeps employers honest, by ensuring they have to pay good enough wages, in good enough conditions, to attract and keep their workers. One interesting side effect is that it would mean that our fundamental notions of the value of paid work could be about to shift, for the first time since the Industrial Revolution.

The full-length essay was originally published at Future Agenda. The image at the top of the post is Ford Madox Ford’s painting Work, in the Birmingham Museum and Art Gallery, via Wikipedia under a Public Domain licence.