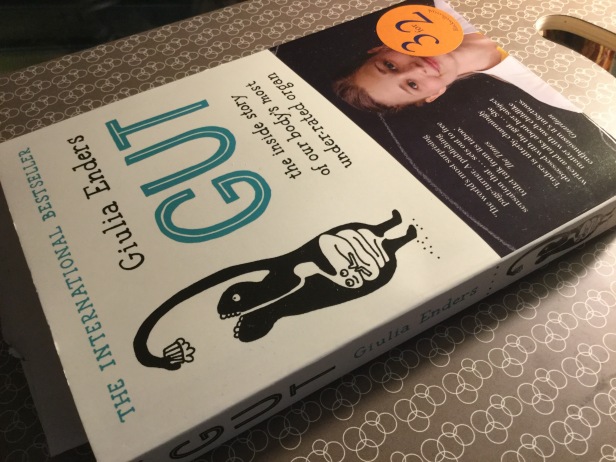 To be honest, Giuilia Enders’ book The Gut isn’t so good, despite the swathes of generous reviews. I’m not going to recommend it. Why not? It’s poorly constructed, tonally all over the place, has a writing style that makes the Daily Mail look like Wittgenstein, and is self-obsesssed, especially with poo1, although that might be a German thing. The cutesy drawings don’t help, although they do reflect the text.

I read it because it was a book club choice, although it turned out that but for a poorly lit smartphone screen we would have been reading Gulp!.

So why is it worth writing about? Well, buried in the self-interest are brief reports of interesting science. It’s possible, for example, that the main function of the brain is to allow us to move around. There’s a sea creature called the sea squirt that is born with a gut and a brain, and once it has landed on a rock with decent nutrients, from which it will never move again, the first thing it does is to eat its brain. It gets by just fine with a gut. Obviously you can write in your own metaphor right there; certainly I’ve worked for companies just like that.

Then there’s the notion that the gut bacteria reward the brain when they are fed things they like. The mechanism: they produce particles such as tyrosin and tryptophan that the brain turns into dopamine and serotonin. As Enders notes, “Several studies have shown that our satiety-signal transmitters increase considerably when we eat the food that our bacteria prefer.” A related obesity theory is that the genes that code for satiety may be defective. Of course, scientists like this kind of talk, but it is as likely that obesity is a function of the business practices of fast-moving consumer goods companies in the late 20th and early 21st centuries.

The book also has a story of an experiment involving to strains of mice, BALB/c (“timid and docile”) and NIH-SWISS, who show “more exploratory behaviour and gregariousness.” The researchers effectively swapped over their gut biomes (I don’t think the mice are actually harmed in this process.) Their personalities also swap over as a result; “the BALB/c mice became more gregarious, and the NIH-SWISS mice were more timid.”

I think this is one of the keys to the interest in the “microbiome.” Some of this is genuinely new science, and it has the potential to change our views of what we are as a species as radically as, say, evolution. This is probably true at two levels. First, the notion that we are large carriers for billions of other creatures; and second, that the brain might not be as important in the way that we think and feel as three hundred years of the Enlightenment have told us it is.

The book club discussion explored some other ideas as well. The current fascination with nutrition and all of its processes might be an attempt to focus on something you can control, in an age of social anxiety. In the UK in the moment of Brexit this might be a retreat into, literally, the inner world.

You can take this further. To some extent, if you look after your gut bacteria, they will look after you. You’ll feel better and so on. A lot of this is reasonably mechanical. Whereas, if you start worrying about your psychological state, sooner or later you rub up against an aspect of yourself that you’re not that fond of, and have to face up to whether you’re going to try to change it or not.

Indeed, Gail Bell reflected on some of this a little in her Sydney Morning Herald review.

Books about the gut appear to be in the ascendant in this first-world age of plentiful food and sedentary lifestyles, all bearing the message that we can improve the relationship with our cranky digestive processes once we master a few tricks… There are parallels here with the recent proliferation of books on neuroplasticity: I was reminded of the banner on Norman Doidge’s The Brain that Changes Itself, which reads “Stories of personal triumph from the frontiers of brain science”.

Don’t get me wrong. We can all eat better, and there are enough sources of depression out there not to want to activate something that might help to reinforce our sense of wellbeing. All the same, in an age of narcissism, worrying about your gut is an act of self-obsession that can easily be dressed up as just another offshoot of our relatively benign food culture. Which is probably why Guilia Enders’ not-very-well-written book has ended up as “an international best-seller.”