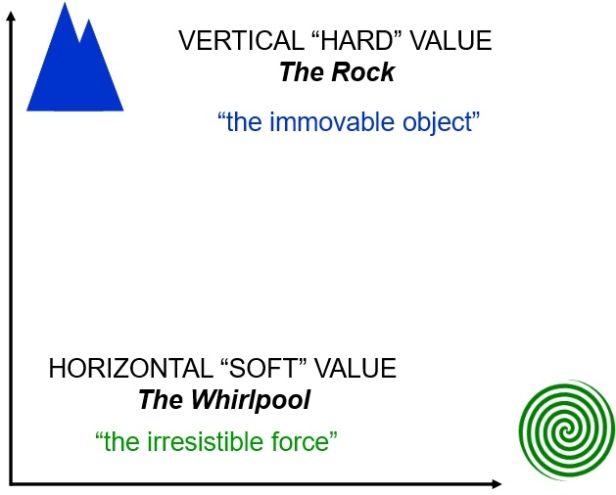 What is the difference between a dilemma and a choice? A choice is just that; once made you can applaud it, or regret it, but it doesn’t have consequences. The road not taken in a choice is a memory, the stuff that poems are made of.

A dilemma, on the other hand, has consequences unless you resolve it. It is a dilemma because if you ignore one of the horns, it will overwhelm you later on. In one elegant version of this, it’s put this way:

But there is an upside to all of this as well; if you do resolve them, you often find a creative path through to transformational innovation.

The idea of dilemma resolution was developed by Charles Hampden-Turner in his consulting practice, and the underlying idea is that organisations typically hold a number of dilemmas that they tend not to deal well with. His own practice involved identifying all of the dilemmas in the organisation, and then resolving them into one elegant systemic analysis, which would, frankly, be beyond the scope of most consultants. (I’m assuming there was an intermediate stage, unreported, that involved sitting in a darkened room staring at the wall until patterns emerged.) The International Futures Forum, largely though the work of Tony Hodgson, has taken Hampden-Turner’s thinking and made it both more accessible and more usable by others.

The visual representation is seen in the diagram at the top of the post. The horns of the dilemma are represented by the x– and y-axes. These represent a conflict that needs to be resolved, between two outcomes that are each essential to the organisation’s health and functioning. We are pulled between them. As Graham Leicester puts it in his book, Transformative Innovation:

We want both structure and freedom, or a job that gives us both money and meaning… One core dilemma is between focus and holism, between being for oneself and being for the whole. As John Cage expresses it in his Lecture on Nothing: ‘Structure without life is dead; and life without structure is unseen.’

And so the dilemma space has five outcomes, as seen in the diagram. Three of these are likely to kill the organisation; in a fourth it will likely muddle through, under-performing as it goes. Only the fifth space—the resolution—is actually a good outcome.

Walking through them in turn, outcome #1, “the compromise zone”, is a state of denial. The first rule of the dilemma, in this space, is that you mustn’t talk about the dilemma. In the version of the diagram where each of the five spaces is represented by a creature, real or imaginary, this is the space of the ostrich, with its head buried deep in the sand. But it could also be the space of the elephant in the room or (in Paul Corney’s evocative phrase) the smelly fish under the table. Whichever it is, the organisation dislikes conflict and takes no steps to address either end of the dilemma.

In space #2 (“the conflict zone”), people talk about it all the time, but never resolve it. The dilemma is a rolling battle-line that sprawls across the organisation. Sometimes one side gaining the ascendancy, sometimes the other. The animal here is the pushmi-pullyu, although you have to have seen one of the several versions of the Dr Dolittle films to know what this is. (It looks like a double-headed llama, with a head at each end of its body.) The result is a series of compromises that produce outcomes that are below par. We’ve all worked in these organisations, where senior managers have a thinly veiled contempt for the worldview of their colleagues and skirmishes spill out across the organisation.

But, actually, that is a better outcome than either #3 or #4–the “top-heavy zone” and the “lop-sided zone”–represented by a dinosaur and a unicorn respectively. These are mirror images of each other; they each carry within them the seeds of their own destruction. If you pursue one without regard for the other, you end up with a highly dysfunctional organisation. In short, two of these spaces are likely to kill the organisation, while the other two are not beneficial.

The thing is, all organisations have these dilemmas. The extent to which they resolve them is often significant in how successful they are. Dilemma resolution starts by naming the dilemmas and bringing them out into the open, which is a necessary first step.

Hampden-Turner, who used a lot of sailing metaphors when first describing the dilemma space, describes one horn as a rock and the other as a whirlpool. Greek mythology metaphors may be the product of an Oxbridge university education, at least for an older generation, but as a metaphor it works well.

Dilemmas do often have an aspect that is fixed, and another that is fluid. The organisation needs to protect its revenue stream, but it also needs to reposition itself. Costs need to be kept under control, but quality needs to be improved. The company needs to grow, but it needs to be sustainable. And so on.

The “fixed” horn of the dilemma therefore also tends to have a couple of significant characteristics. It tends to be embedded in the way the organisation does business (this is also true of non-profits) and therefore in its business systems and its business model. It is also, typically, associated with quantifiable metrics that are familiar to the organisation as a whole, and very familiar to those who advocate its importance.

The other horn, the whirlpool, is more associated with qualities that may be less easy to measure. Immediately you can see the type of organisational conflicts that will emerge, and the types of people who will be on either side of the divide.

If the advocates of either of the horns get control of the business the result is disastrous.

The ostrich is probably going to be quietly underperforming until the crisis hits; the pushmi-pullyu at least has the issue out in the open, but needs a different culture to resolve it. The only space where the horns have been reconciled—or rather, integrated—is the fifth space, represented by an eagle.

Both parts are necessary

There are excellent resources online that describe a process for doing this, but in a nutshell it is about first, respecting the importance of both of the horns of the dilemma to the continuing health of the organisation (and therefore also respecting those that hold either part close to themselves). This is because both parts are necessary. Going back to the start of the post, this is because it is a dilemma and not a choice.

The second building block involves identifying the values that sit behind each horn, and understanding what they bring to the organisation. And, therefore, why the organisation needs them.

There are, of course, some obvious, even famous, business dilemmas. Cost versus quality is one, which plagued the world’s automakers for years. Sustainability versus cost is another.

Because they’re famous, they have been well-rehearsed. We can draw out some lessons in how they were reconciled.

The cost versus quality dilemma was resolved by Edward Deming, a prophet without honour in his native America. His insight was that low quality has a much greater cost than the money saved during production; the cost of repairing or replacing a defective new car was huge, quite apart from the effect it had on reputation. Deming effectively reframed the of cost so it included more business units or actors over a longer time.

Sustainability, similarly: the costs look very different when you look at lifetime value rather than cost of acquisition or installation.

This is one of the reasons why much of the recent work on dilemma thinking has been done by people associated with the Three Horizons thinking, notably around the International Futures Forum.

Without re-rehearsing the whole body of Three Horizons thinking (there are plenty of other posts on The Next Wave about this), the reason that dilemma resolution is valuable is that it is a constructive way for the Horizon 1 managers, the Horizon 3 visionaries, and the Horizon 2 entrepreneurs to have a respectful and creative conversation about getting to that better place where the eagle flies. All of the alternatives are worse, some fatally so.

To learn more about Dilemma Resolution, I recommend the resources published online by H3Uni. There is a detailed description of the process, and a detailed facilitator’s guide.