This post was written for the blog at SOIF, where I work. Cross-posting a version here for people who might have missed it there.

Jeremy Lent’s book The Patterning Instinct is about how human societies all over the planet have seen and understood patterns of change. A recent post on his blog, mentioned in last week’s collection of Sixes and Sevens, tries to make sense of some recent events, including the burning of the Amazon forests. As he notes, whatever our view of Brazilian ranchers and the their government’s blind eye, “the subtler, and far more powerful, forces driving us to the precipice come from the Global North.”

“The simple lesson is that our global leaders currently have no intention to make even the feeblest steps toward changing the underlying drivers of our society’s self-destruction.”

What’s true for forests is also true of human systems.To explain it briefly: In the top left area, when potential is high, and connectedness low, the system is open to change. This is typically because it is coming out of a crisis and a lot of connections have failed or broken. The ‘exploitation’ stage is when the system is making new connections, building different types of social capital and new institutions.

The system prospers during the  ‘conservation’ phase, as a result of this re-building. In ‘release’, it’s living off its capital. Yes, the language comes from ecology, and specifically from forest systems, and takes a little translation.

It’s worth noting, for reference, that the Fourth Turning model of Strauss and Howe, whatever its problems, also has a similar structure across its four generations and eighty years. For them ‘crisis’ (= reorganisation) leads to ‘the high’ (= exploitation), which leads to ‘awakening’ (= conservation) which leads to ‘unravelling’ (= release). And back to crisis again.

Putting this into a historical context, for example in the UK, ‘reorganisation’ might be thought of as the 1930s and World War II. ‘Exploitation’ might be the new institutions that followed (e.g. the welfare state and the building of new towns and houses).  ‘Conservation’ is the prosperity of the ’60s and early ’70s, and ‘release’ is the long unwinding of the the ’80s and ’90s.

There is a warning in the model, shown in the way it’s drawn. Reorganisation doesn’t always lead to rebuilding. Sometimes there’s a collapse instead. 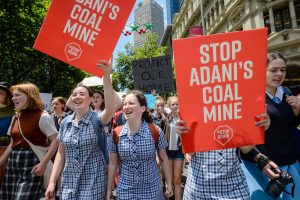 But we’re clearly in a reorganisation phase at the moment. New ideas take root and create new connections and new constituencies. This is why the Green New Deal is suddenly the stuff of Presidential campaigns and mainstream British political party proposals. The current wave of school strikes for the climate are part of the same phenomena.

There are, of course, less desirable futures trying to take hold in the same terrain–often dystopian legacies from the system that has run out of energy. But the point is this: this political moment, in the top left of the diagram, is a radically open future, where dramatic change is possible.

The picture of Yasuni National Park at the top of the post is by ALAI, Agencia Latinoamericana de Información, CC BY-SA 4.0.)

Selected articles on cities, innovation, technology, and some from my "interactive TV" archive in the '90s.
Join 4,410 other followers